We are nearly at the end of October, can you believe it? The year has certainly rushed by it feels and I am beginning to see the signs of Christmas 2018 around the place. So today I am bringing you a Christmas inspired layout from last year; a very cheeky photo of my niece wearing a Santa hat in the November 2017.

I have used a cut file from the Silhouette store and 2 of the papers from the October 2018 kit to back part of the file, the green paper is from my stash. I have also used some of the papers to also create layers behind my photo, I made this a mix of the bright and colourful and flatter papers to give the photo some lift of the white card stock background.

I have then used the beautiful Christmas embellishments from the kit to spread some Christmas cheer and fun around my layout, starting with the large tulle silver flower, then adding the smaller green flowers and then adding some of the gorgeous red blings.

From my stash I pulled in some little journal pieces to add a few extra touches to complete this layout. 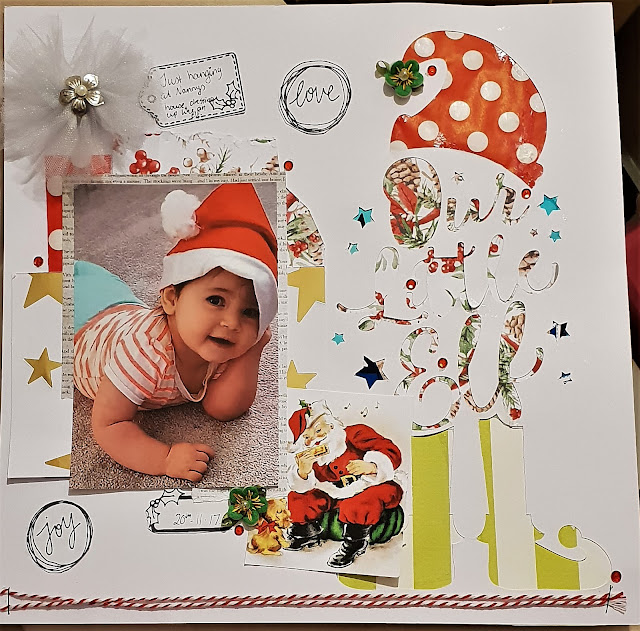 I have a bonus to this post today and have a process video to share as wiel over on my channel so be sure to click on the link below and check it out.
https://youtu.be/E8ZyVrPCzto

See you next month

Back again with another fun project to help finish my 2017 December daily album.

This time I want to make a pocket page, using the cards in the October 2018 kit. 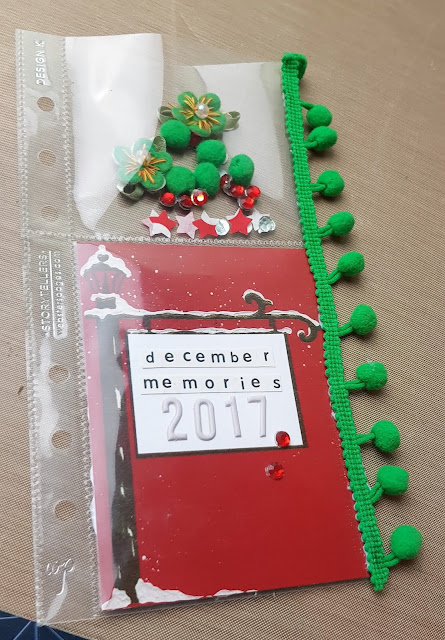 I cut down the signpost card, added alpha stickers and red bling from the kit, slipped it into the pocket.

Above that in a pocket, I made a shaker pocket. Using the pom poms cut from the green ribbon trim, with red bling (that I joined together so the sticky sides were covered) and I used hole punch to make circles out of patterned paper in the kit.

I added green trim to the whole side of the pocket for pop of colour and awesome texture. 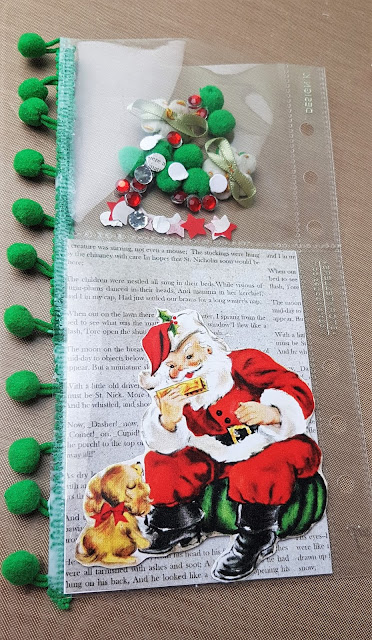 On the back I cut out the Santa with the puppy from a card and positioned it onto the text patterned paper that I cut down to the right size.


Good morning lovely people, I’m up on the blog today sharing a 6x12 layout using the October 2018 kit. This month I really wanted to challenge myself to use a Christmas themed kit to make a non-Christmas layout. I just have to say this layout started off very different from the end result. So I challenged myself to use a few of the red elements from the kit. 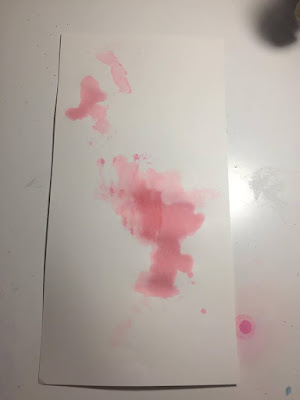 I started with a pre-made mixed media background. To do this was just a red alcohol marker and some rubbing alcohol. Then I used the packaging technique to make a soft pops of colour on the white card-stock. 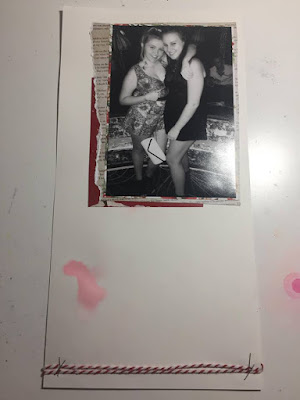 After starting the layout I knew that I wasn’t loving how the mixed media was looking, but again I challenged myself to use it. To do this I matted the photo with the papers from the kit, I used some double-sided tape to stick down the paper mats and then some double-sided tape to stick that to the background paper. Then I used the red twine from the kit and wrapped it around the bottom of my paper and stapled them down. 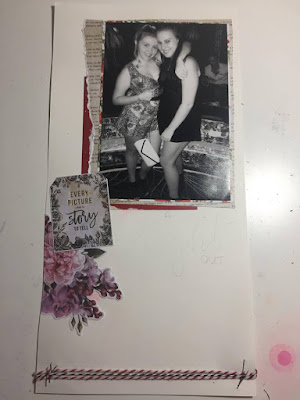 Next I used some die cuts from my stash to cover the little bit of mixed media down the bottom. I also used a pencil to sketch out my title. Using hand lettering on your layouts is a great way to add a title if you do not have any alphas that match your layout. 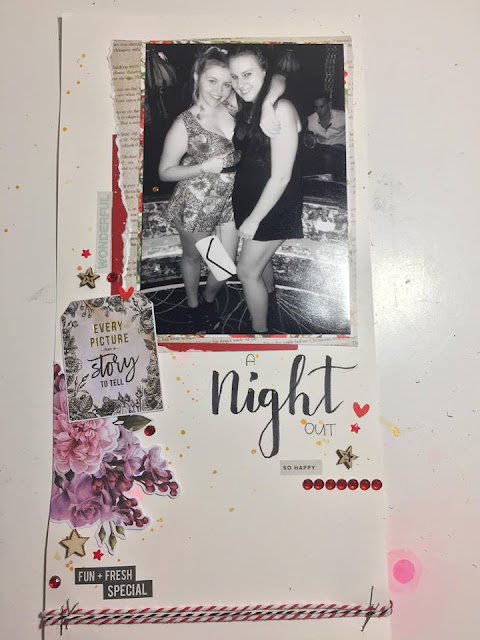 Next I used the red rhinestones from the kit to create a little ‘shelf’ for the title. I really like how this turned out, I think it pulls your eyes attention to the title. Finally I used some wood veneers and tiny resin starts from my stash to add little details around the page. And a little bit of gold splatters around the page.


Go check out all the other ladies lovely creations thismonth. That’s all from me today,
Thanks everyone,
Jaymi.

The day after I unboxed my October 2018 kit, I was shopping in a fabric shop and found this lovely long tassel with bead at the top and new that would be great as a start to charm embellishment cluster for my 2017 December Daily Album that I need to complete.  I wanted to add some of the goodies from the kit to bulk out the charm cluster, not just have the tassel by itself.

I started with the price tag from the tassel, I added the lovely wide washi tape to both sides and one of the felt flowers as a 3D goodness. I had also purchased some gold bells and threaded them onto the tag. It already had its own string so that part was sorted. 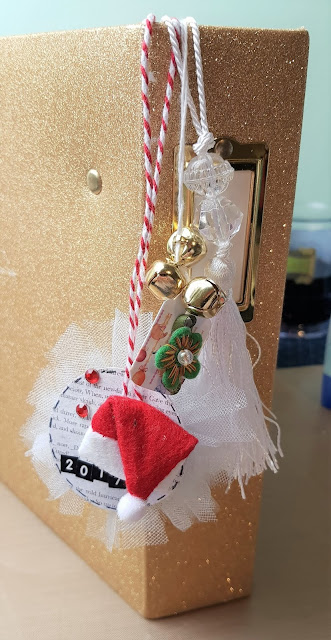 Next I punched a hole in the felt Santa hat, threaded some red and white bakers twine in the kit through it. However the felt wasn't strong enough to have a hole and thread through it so I had to rethink that - and boy did that take me a little time to work out how to use the Santa hat as charm but in way that suited long term use.

While fiddling around I worked out that I could punch a circle out of the text paper and back it with white circle, place the Santa hat and thread on top by using wet glue. I then added two red bling and small alphas that spelt 2017. Added a dotted line border and was happy.

I was then holding up the three charms, the tag, the tassel and the Santa hat circle to see how they looked together and trying to make the green pom pom trim work. It was then that I wondered if I could include the homemade tulle flower and as they hung next to each other I decided that the Santa hat circle looked good backed by the tulle flower!  I made that happen and so delighted with how it looks.

So I then used red and white bakers twine in the kit to loop on the charms and then tied in a double knot as a loop. I then looped it through the rings in the 8x8 album that I using as 2017 December Daily album.

October is here and we are on the roll to Christmas... eek! But how gorgeous was this Month's kit as a nice little reminder of the coming festive season. I did decide that for my first project using this kit I would catch up on some older family Christmas photos that are sitting in my photo box. This photo is going back to 2016, and we have kind of created this tradition of Santa photo on Christmas Eve. 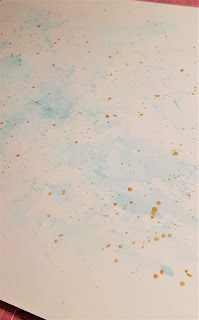 For this this layout I decided to bring in some of the background colour and bling of the photo, so using the packaging technique and the Tumbled Glass Distress Oxide I smooshed the ink all over the background. I then splatters of gold colour shine would be the perfect touch. 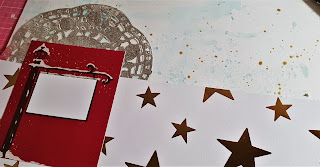 I have then pulled a piece of patterned paper from my stash to add to this layout (I think it is an old My Minds Eye Christmas one). I used it to break up the page a little and a different paper layer to behind the photo. I have then used the silver doily and the sign post card to create a larger cluster and journaling space next to my photo. 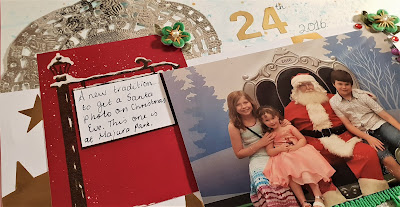 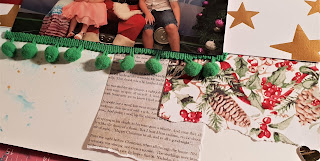 After this I have added my photo and then the green trim from the kit would add the perfect pop of colour to break away from the red and some texture to the page. To balance out the large cluster I thought I would use the papers from the kit and make a smaller type cluster in the bottom right. I have torn the edges of the pieces to give them that rough book kind of look, as if you were looking at a story. 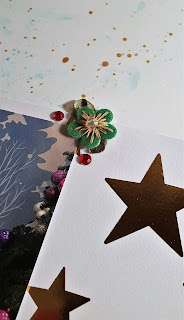 Then using some of the smaller embellishment pieces I embellished little spots on my page and then added my title and date using gold number stickers. 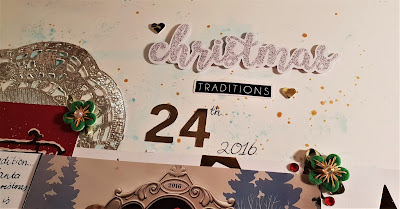 And that is my layout done! 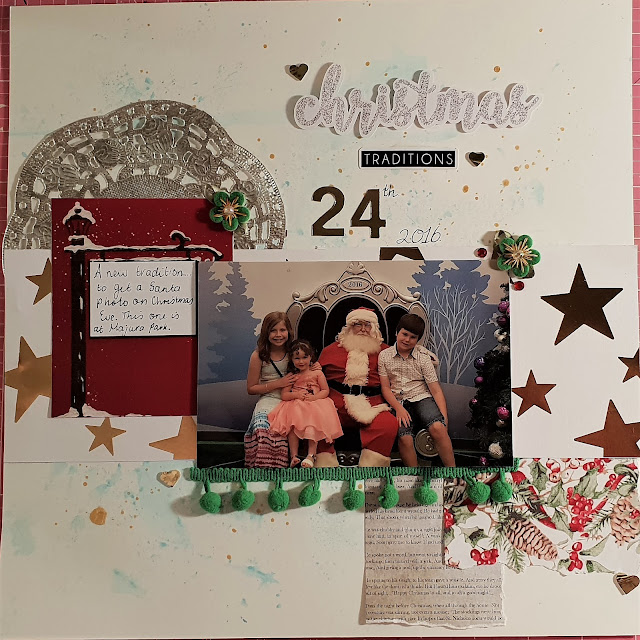 I am loving this layout and how easily this kit is to use with previous Christmas stash as well as other things in my collections.

Until next time
Amy 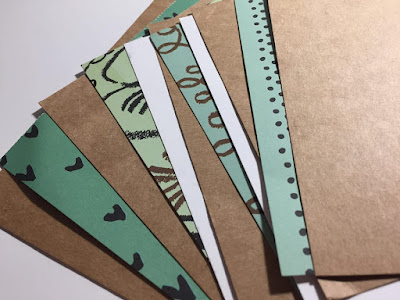 Hello lovely ladies, I’m up on the blog today sharing my first project using the October 2018 kit. For this first project I wanted to make a really simple Christmas album because I’m not doing December daily this year, but I still want a simple way to document my Christmas memories. I grabbed two 12x12 kraft cardstock sheets, two 12x12 white cardstock sheets and a few random green papers from my stash. I then cut down all the paper so they were all 6x6. I just arranged them in any order, but I knew I wanted kraft to be the first page. 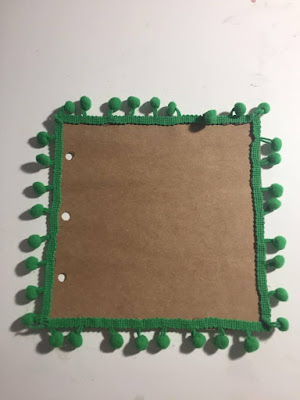 Next I used my hot glue gun to glue down the green pompom trim from the kit around the front cover of the mini album. This took a little bit of time but using a hot glue gun makes it so much easier then standard wet glue. 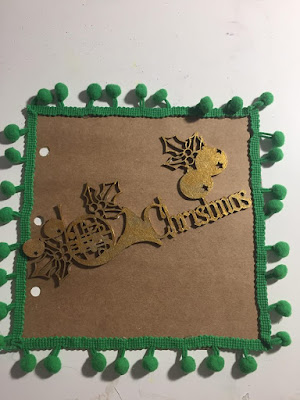 Next I took the chipboard Christmas word from the kit and painted it gold. This took a few coats but because they were very thin it dried very quickly. Painting chipboard or wood veneer can add a really nice textural element in a paper craft project. I then glued it down onto the front cover using wet glue. 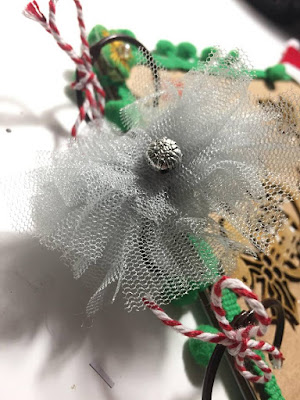 Next I just went a little embellishment crazy over the cover. I hot glued the green fabric flowers from the kit on top of the green pompom trim. I also used the hot glue gun again to put the adorable little Santa hat on the top right corner of the album cover. I put a label from my stash and stamped on the December 2018. Finally I put some white splatters all over the page. 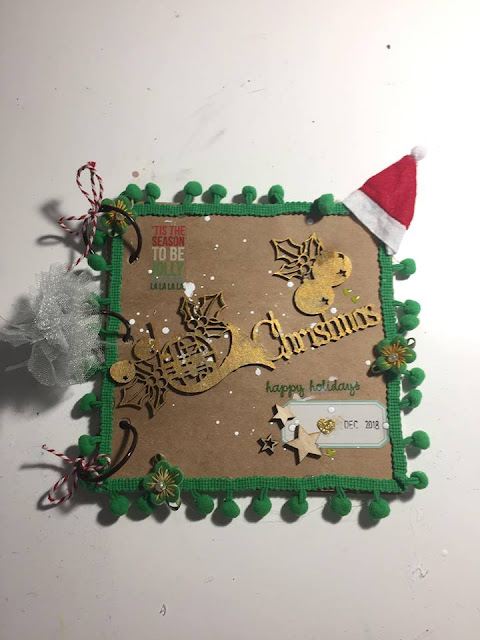 I’m really excited to fill this mini album with all the Christmas memories this year. I’m also so happy with how this mini album cover turned out, I haven’t made a mini album not in binder in 5 years so this was really fun to make. Go check out some of the other ladies projects using the October embellishmentkit.