Hey, thanks for stopping by.

This is my first blog for Scrapping Fun Kits and I feel lucky having this kit as my first one - it's stocked full of inspiration! 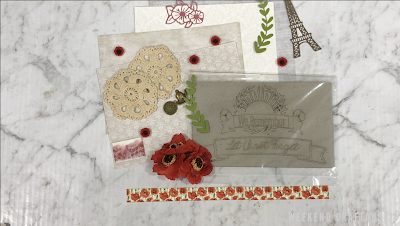 My thought was to document the story of my great-great Uncle who fought in both World Wars. Whilst our heritage is English, I still feel a connection with ANZAC as he fought at Gallipoli from May 1915 to January 1916. I've outlined below some info we were about to find from the National Archives. Of course my title would have to be, quite simply, Respect. 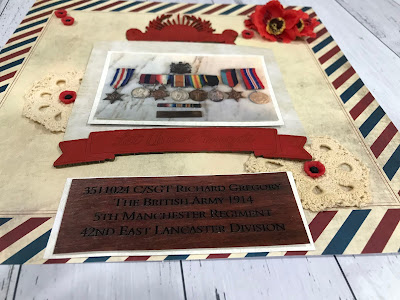 Richard Gregory - born in 1886.  He joined the army before the first world war started. He was a grocer before becoming a soldier.  He joined the:
1/5th Battalion The Manchester Regiment (Territorial Force) which formed 127th brigade and the 42nd East Lancashire Division. Mobilised at Wigan 4 August 1914 and set sail on the 10th September sailed from Southampton for Egypt, arriving Alexandria 25 September 1914.
To Gallipoli 9 May 1915 (Krithia - June 1915. Achi Baba Mullah & Krithia Vineyards - August 1915)
Withdrew from Gallipoli on 9 January 1916. Over 14,000 men served in this division, only 4,000 returned alive. His medals for the World War I campaign (from left to right) are:

Distinguished Conduct Medal:
He was allowed to use DCM after his name for being awarded this.
1914-1915 Star: 2 million of these were issued, and they were issued to men who served in a theatre of war before Dec 1915.  Richard received his for fighting in Egypt and Gallipoli.
British War Medal: 6 million issued, and everyone who left Great Britain received one of these, issued at the end of the war.  Made of silver, so a lot of these were sold by soldiers or their family, as money was scarce after the war.
Victory Medal: 5 million issued, again only for soldiers who saw active service. These were issued at the end of the war.
Territorial Efficiency Medal: Issued after 12 years active service.
The 3 badges in the middle were referred to as Pip, Squek and Wilfred - as there was a cartoon in the national newspaper at the time of the war by this name.  Most men that saw active service received the British War Medal (middle one) and the Victory Medal (brass on the right of middle) and these were known together as Mutt and Jeff.

He began his service as a private, then moved up to corporal - which meant he was in charge of a section of men. Lastly he was promoted to a colour sergeant before the end of WW1. A colour sergeant is a non-commissioned rank - and the highest rank that can be given to a 'non-educated' soldier.  Historically, Colour Sergeants of British line regiments were tasked with protecting Ensigns, who were responsible for carrying their battalions' Colours (flag or insignia) to rally troops in battles. For this reason the Colour Sergeant rank was considered a prestigious one given normally to courageous Sergeants who had attained accomplishments in battles.  Richard survived WW1 and went  onto serve in WW2, earning another 4 medals - but that's another story!

I was able to use half the supplies in the kit, and only added a 12x12 scrapbook sheet in from my stash. I chose this because I liked the way the edges reminded me of design of long distance airmail envelopes from yesterday. It also tied in perfectly with the 5x7 sheets in the kit.

My first plan was to colour in the chipboard pieces with some acrylic paint. They came out a bit brighter than I expected, as I wanted to tie in with the paper, but they do match the flowers quite well, so I'm happy with the end result.

As well as having a couple of photos as my theme for the layout, I also had a copy of his Record of Service I wanted to keep with the layout, so I decided to use one of the 5x7 sheets of paper as a placeholder. 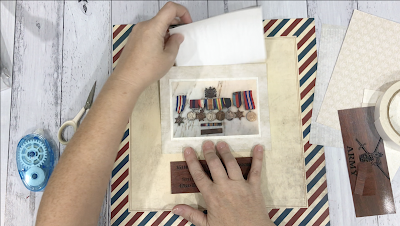 I used the paper sheets as borders for the photos, as well as adding foam to the back of the plaque - this is a photo from the jarrah box that I had made to keep the medals in.

After that, the layout came together really easily, the resin poppies and crochet worked so well and I love the texture these bring to the layout.

I was aiming for a bit of old-world charm as well as a sense of formality in the placement of these pieces, which I hope I've conveyed in a respectful way as appreciate for the contribution and sacrifice made by many. 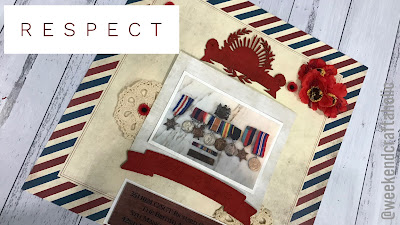