Amy here with an end of month project and for this one I decided I needed to get a little mixed media, as I stepped back in time and documented this photo of my son in the days I came home from hospital with him.

I started this layout with the plan to have a plain white background and hearts, but it was not cutting it for me. So after punching out several hearts from this months patterned papers, I painted the cardstock using my Jane Davenport watercolours.
I then matted my photo on the tissue paper from the kit to give it a nice soft border and popped it on some craft foam for some dimension off the background.

I knew I was using the cut out words 'Sleepy Cuddles' as my title but wanted to add a little texture behind them so popped the twine from the kit in behind them. I also added the cuddles to the photo just to cover some of the negative space on the photo.

Now the main parts of the layout were on I played with the embellishments. I started by adding to the heart clusters I begun making. I loved the little blue feet so wanted to add those so they completed the cluster at the top and for the bottom I just added 1 of the little flowers. I also added the blanket cut out with the cot cut apart over the top under the photo as a large die cut piece. 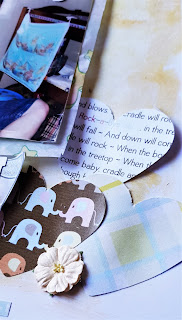 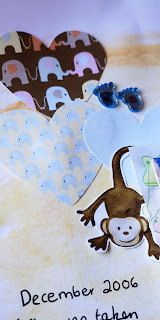 I felt there was something missing down the left side so I added another little cluster using the giraffe cut apart and word strips and then wrote my journalling.
I also added a longer word strip at the bottom to finish off the layout.

I love, love this layout and love that I have managed to save this photo from deteriorating further and losing it (it was being lost in a broken frame in my sons room). 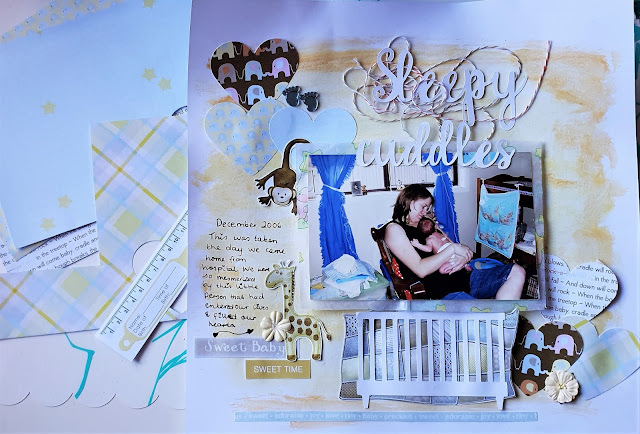 Looking forward to our July kits!
Amy.
Posted by Amy Lane at 17:00