When I unboxed the September 2018 kit I knew that was going bring some sunshine-y inspiration to my scrap desk and I wasn't wrong.

I have been trying every now and then to use blocks of patterned paper and position them on the layout in a manner that looks appealing to my eye, much like traditional older style scrapping. however I haven't been able to make it work to my style but the paper in this kit was the catalyst to finally conquering this style for me.

I grunged it up and made it more messy, as I think the flat paper to paper style wasn't my style and hence why I couldn't make it work. sometimes its the simple changes that impact the most :)

So I started with my distress tool and roughed up all the edges of the paper, even letting it rip at some places randomly.

I scrunched up the top layer before taping it all done. I only positioned the tape in the middle of the paper, firstly so that I could get the texture from height of paper rather than flat against the cardstock and secondly in case I wanted to tuck in anything.

I cut down the paper bag and used that as a layer as well, roughing and scrunching it up after I stuck it down (don't know why I didn't think to do it before, but it was obvious it needed it when stuck flat pristine piece of paper down on the other layers hahaha).

On the cut apart sheet was this yellow frame piece that I also roughed and scrunched and used as the photo layer. Adding two strips of the yellow flower washi to top and bottom of the photo. The photo was small 2x3 in roughly - printed in card size from Selphy printer.

The cut apart came in handy when adding a label for journalling and two word strips to embellish the layout. I finished the embellishing off with some of the resin flowers and a button from the kit and enamel dots from my stash.

I was thinking I may use a word strip as my title, but thought it needed something to outer edges of the patterned paper, I did audition the grey ribbon but it wasn't the right texture for this layout. Instead reaching into my stash for some larger yellow alpha stickers and placed them vertically on left side of the patterned paper cluster.

To totally complete the layout I used yellow ink pad to ink the edges and also rub some colour onto the stark white background. I also grabbed my lead pencil and bordered two opposite corners and added shadowing to the title.

If you would like to check out the process video for this process click here to be taken to my channel and this video.

thanks for stopping by,
Lauren 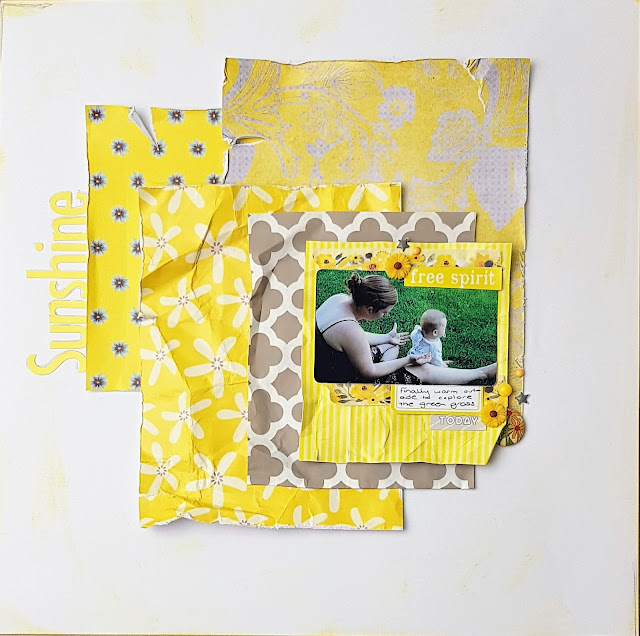